New additions to the gun locker

In the last month or so I've picked up three new additions that nicely round out my arsenal.

Mossberg 590 with a Speedfeed stock (50668)
I was literally talked into this one and if a gun purchase could ever fall into the impulse-buy catagory, this one would be it. We needed a shotgun and I've been thinking about getting one since I began buying guns. I almost immediately upgraded it with a Surefire 623FA. 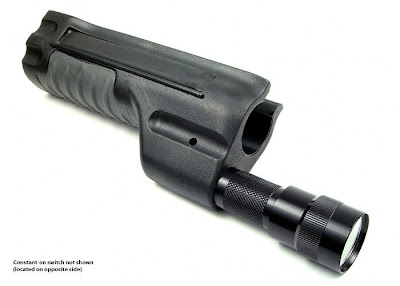 I had problems installing the fore end because the light hit the bayonet lug attached to the barrel band. The place I bought it from didn't tell me that I might have problems even though the salesman said afterwards that he knew there might be problems. What the hell is that? What a prick. I probably would have bought the fore end anyhow, but it would have been nice to know about potential problems before making the purchase. Surefire didn't have anything about it on their sight either. After two sessions with the store's gunsmith, I had the bayonet lug milled off and I was back in business. I need the light more than a bayonet, I just hate to change a gun unless absolutely necessary - it was necessary. I have to say that I was pretty concerned about the recoil. My .308 Springfield Armory M1A kicked me pretty hard to the point I needed a shooting pad. I'm about 140lbs and don't have a lot of bulk. I've read that with the right recoil I should be able to handle larger caliber firearms. I found a cool article on shooting a shotgun using an alternative stance and it's worked wonders. I'm anxious to try it out with my M1A as well. I'm more bothered by the noise of a heavy OO Buckshot load than its recoil. I still need lots of practice and training.

Glock 19
I am a fan of Glocks. I like their reliability, handling, and range of accessories. I have another 9mm model, the 17. I bought that one a few years ago. The model 19 is a wonderful sized pistol, something that my wife can shoot comfortably. Ultimately, I'm planning on keeping the 17 in the car and the 19 around the house for that bump-in-the-night. I'll have to look into getting a good light for it as well, whether it be hand-held or a weapon-light.

Glock 30
I had bought a Kahr PM9 for CCW. I had barrel-peening problems and still have to have that fixed. I'm confident that Kahr will take care of me, but I ultimately decided that I want to carry a .45ACP. I think I'll need a considerable amount of training to pass the CCW qualification, but that won't have as much to do with the caliber as my trigger skills. I bought a Thunderwear holster for it since there's no way I could conceal a 30 on my hip, not with my build. I'm planning on carrying it with a 9 rd magazine with a 13 rd back up. I still plan on carrying the PM9 in a pocket holster, just in case.
at 7:29 PM