One Gun Too Few

What the Washington Times of Tuesday, 17 April, aptly headlined as the “Massacre at Virginia Tech” is a tragedy that should—that must—teach this country a number of serious lessons.

First, that all so-called “gun-free zones” are exceedingly dangerous places. For all “gun-free zones” amount to “self-defense prohibition zones” for honest citizens, and therefore “free-fire zones” for psychopaths, “terrorists,” and other homicidal criminals. If common sense did not, certainly the experiences documented by researchers such as John Lott confirm that the less “gun free” an area is (in terms of firearms in the immediate possession of honest citizens ready and willing to use them), the less violent crime occurs there.

Virginia Tech has long been a “gun-free zone” for the purposes of its students’ self-defense. In the name of preventing violence, the university has prohibited every student with a Virginia license to carry a concealed firearm from doing so on campus. Surely debatable is whether such a regulation is even legal—given that such a license is a Virginia statutory right of any individual who qualifies for it (and, I should argue, a constitutional right as well) that no mere administrative body has any authority to deny. Beyond dispute is that events have written in blood just how disastrously that idea worked on Monday, 16 April 2007: Apparently everyone among the student body obeyed the edict, except the killer. The regulation perhaps disarmed students who might otherwise have legally been carrying a firearm with which they could have stopped the killer in his tracks. And the police, who were armed and on the campus, proved ineffective, because they were not on the scene. (continued)

The selection of effective handgun ammunition for law enforcement is a critical and complex issue. It is critical because of that which is at stake when an officer is required to use his handgun to protect his own life or that of another. It is complex because of the target, a human being, is amazingly endurable and capable of sustaining phenomenal punishment while persisting in a determined course of action. The issue is made even more complex by the dearth of credible research and the wealth of uninformed opinion regarding what is commonly referred to as "stopping power."

In reality, few people have conducted relevant research in this area, and fewer still have produced credible information that is useful for law enforcement agencies in making informed decisions.

This article brings together what is believed to be the most credible information regarding wound ballistics. It cuts through the haze and confusion, and provides common-sense, scientifically supportable, principles by which the effectiveness of law enforcement ammunition may be measured. It is written clearly and concisely. The content is credible and practical. The information contained in this article is not offered as the final word on wound ballistics. It is, however, an important contribution to what should be an ongoing discussion of this most important of issues. 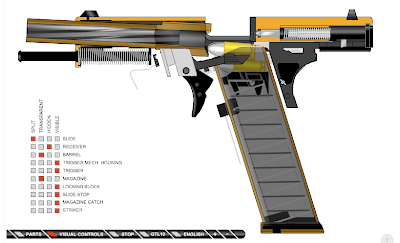 The freakin' coolest animations if you're curious how your Glock really works.
at 8:28 AM No comments:

I don't know if it's completely legit for me to post materials from copyrighted material like this, but I'd just hate to lose a link to a good article.

By MARY FOSTER
Sixty-four-year-old Vivian Westerman rode out Hurricane Katrina in her 19th-century house. So terrible was the experience that she wanted two things before the 2006 season arrived: a backup power source and a gun.

"I got a 6,000-watt generator and the cutest little Smith & Wesson, snub-nose .38 you ever saw," she boasted. "I've never been more confident." (continues)

I don't know if it's completely legit for me to post materials from copyrighted material like this, but I'd just hate to lose a link to a good article.

By MARY FOSTER
Sixty-four-year-old Vivian Westerman rode out Hurricane Katrina in her 19th-century house. So terrible was the experience that she wanted two things before the 2006 season arrived: a backup power source and a gun.

"I got a 6,000-watt generator and the cutest little Smith & Wesson, snub-nose .38 you ever saw," she boasted. "I've never been more confident." (continues)

Things I gotta think about

The Virginia Tech shootings have had me thinking about a lot...

Stressed out over ammo

I don't usually pay much attention to my dreams. But I had a slightly disturbing one last night and I know it's mostly because I'm relatively stressed out in my situation right now. No big deal.

In the dream, I was in a huge house with two elementary school friends - now grown up as well. We had to defend ourselves in the house from hoards of people or things outside. I know, cliche zombie movie. That much was entertaining. I had my small arsenal to which my friends added a couple firearms of their own. I only remember a .357 magnum revolver because I didn't have any rounds for it.

Which brings me to the heart of the "nightmare". We were adequately armed with various handguns and long arms, but I was haunted by the realization that we didn't have many rounds to fend off the intermittent waves of attackers. A few shot shells, a hand full of pistol rounds and a few mags worth of rifle rounds. That was it.

Once I woke up, I began to realize that I don't have a suitable stockpile of ammunition at home or cached away. I only have a total of about 500 rounds, not including about 500 rimfire rounds. I was planning on really building up what I have at hand, but I think I should really consider what I want to keep in stock. I'm not planning on an invasion. I just want to keep a comfortable cache for those "dry" times.
at 2:56 AM No comments: