I just found these in a pile of papers I was going to throw out. Unfortunately I have no idea where I found them. Did I write them? :-) Doubt it.

In America, the burden of proof lies with those restricting civil liberties, not those who enjoy and protect those freedoms.

Liberals have just as many freedoms to protect as anyone else, perhaps even more.

I saw that Remington was selling "tactical" versions of their 870 shotguns with these stocks and they look like a great add-on for any shotgun! Knoxx makes some huge claims about how much felt recoil reduction you'll get, but aside from all the numbers, they have some wicked videos showing folks firing the shotgun with someone's should sandwiched between a wall and the stock and even someone firing the shotgun while it was pressed against his belly! I'm a pretty light guy, so something like this really appeals to me.
at 6:39 AM No comments:

If you can't beat 'em, send a bunch of cartoons after them. 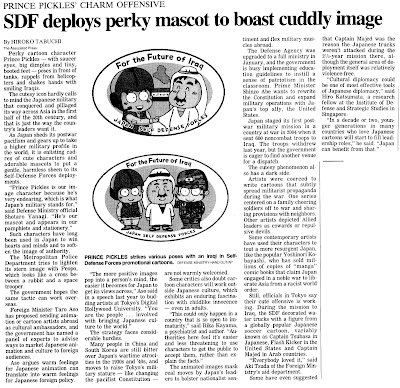 I was talking with a co-worker yesterday about Prince Harry's probable deployment to Iraq. We were talking about the the difference between the British Royalty and the off-spring of our own elected officials. I rather jokingly doubted that any U.S. President would have sent his own son into Iraq.

Of course, it isn't equitable to compare British Royalty to our own president. I'm not trying to argue that one way or another.

It did lead us to a conversation about the tradition of British Royalty to enter military service as compared to America's leaders. I disgustingly commented that it's been a while since we've had a leader with real military knowledge under his belt.

History does not long entrust the care of freedom to the weak or the timid. - Dwight D. Eisenhower

So, the question I had was how many U.S. Presidents had active military service (G.W. doesn't count) and what kind of record does the British Royalty have as well?