"I got interests, not hobbies... you don't have to pay for things your interested in." - George Carlin

I wish I could be content with only interests, but alas I've had a number of hobbies - all of which get to be expensive over time. My long standing hobby has been computers. Sure, at times they've been my profession or at least a significant part of it. I've even been able to write them off for tax purposes. But, I use them a lot in my spare time as well. I don't play computer games often, but I'm usually tweaking my server, etc. It's crazy how much money I've spent on computers over my life time. I've got a network at home that out numbers the family members 2:1 - four of them, looking at a soon to be five.

The reason I'm writing is because I was just looking into the Mac OS X Leopard server that's due to come out next year for around $1000. "Not bad", I think - for what it will do. I can't justify buying it, but I'd definitely consider it. Having my own server kicks ass, even if I'm not using it to commercially host websites.

But then hold on. That's a new Glock, or XD45ACP, with a few extra mags and a half dozen boxes of premium ammo. Now my server will rock for another 5, 10, perhaps even 12 years, since computers age like dog years if not faster.

But my new handgun or rifle will likely out last me. Especially the way I like to anally clean my weapons. As long as the S doesn't hit the fan... they'll be around a long time. Now that's what I call a value.

At the beginning, my new wife didn't mind my arsenal. Now she's complaining about why I need so many, that's 8 right now. I think we need a couple more to cover our bases and that's just what I'm going to do.

I think I'm going to keep my hobbies as well, but they'll probably get a smaller piece of the pie. :-)

I wonder how others balance their interests?
at 7:27 PM No comments:

Liko Kenny kills officer then is shot by passer-by

Bode Miller's cousin kills officer, then is killed by passer-by

FRANCONIA, N.H. (AP) — A cousin of skiing star Bode Miller fatally shot and ran over a police officer, then was killed by a passer-by who grabbed the officer's gun.
Attorney General Kelly Ayotte said Liko Kenney shot Cpl. Bruce McKay four times, then ran over him with his car after a traffic stop Friday night.
Gregory Floyd, who was driving by with his son, grabbed McKay's gun, then shot the 24-year-old Kenney when he refused to put his gun down, Ayotte said.
"This once again reminds of us of the difficult and dangerous work that is done everyday by the law enforcement of this state to protect each of us," Ayotte said at a news conference in Concord. (continues)

What a stunning story. What catches my attention the most is the brave citizen who stopped Kenney from doing any more damage. Even though Kenny didn't seem like a public enemy, he was obviously unbalanced. Regardless of his history with the police, you can't justify killing a cop, another human being, for those kinds of altercations. I hope Floyd is able to get the best lawyers to protect him from the victim's family.
at 9:44 PM 3 comments:

By Josh Meyer, Times Staff Writer
May 12, 2007
WASHINGTON — The FBI has hailed the breakup of an alleged plot to kill soldiers at Ft. Dix, N.J., as a major success story. But federal authorities acknowledge that the case has underscored a troubling vulnerability in the domestic war on terrorism.

They say the FBI, despite unprecedented expansion over the last 5 1/2 years, cannot counter the growing threat posed by homegrown extremists without the help of two often unreliable allies. One is an American public that they lament is prone to averting its attention from suspicious behavior and often reluctant to get involved. The other is a small but growing army of informants, some of whom might be in it for the wrong reasons — such as money, political ax-grinding or legal problems of their own.

Such dependence on amateurs is "not something that we would like. It's something that we absolutely need," said Special Agent J.P. Weis, who heads the FBI's Philadelphia field office and the South Jersey Joint Terrorism Task Force, which conducted the Ft. Dix investigation.

Weis and other FBI and Justice Department officials acknowledged they probably never would have known about the six men and their alleged plans had it not been for a Circuit City employee who reported a suspicious video.

And, they said, an FBI informant was instrumental in gathering evidence to file criminal charges by infiltrating the men's circle for 16 months as they allegedly bought and trained with automatic weapons, made reconnaissance runs and discussed plans.

Weis and others said the bureau had to rely on the public and on informants in domestic counter-terrorism investigations because of the changing nature of the global jihad and the threat it posed within the United States. (continues)

So, how does the public change from being reluctant to take part in our collective security while balancing the process of observing from digressing into McCarthy-ism?
at 2:06 AM No comments: 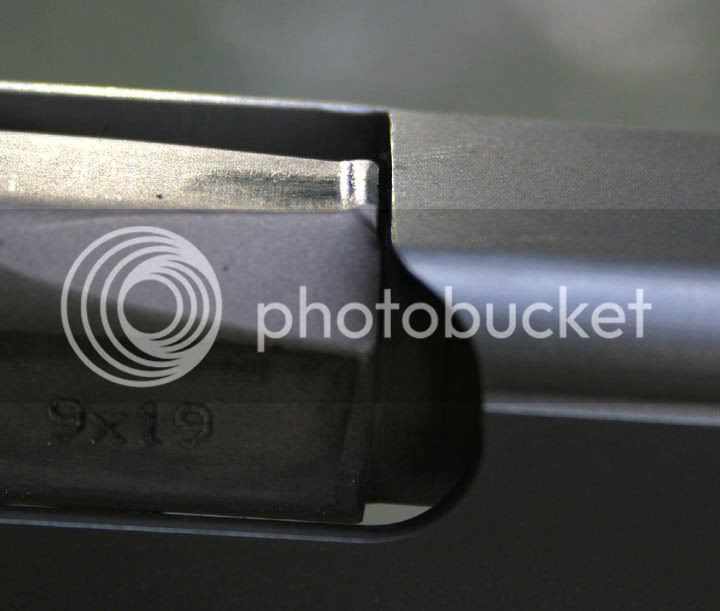 After I bought my PM9 last summer, I've had feelings of dread every single time I think about it. I first noticed a problem with the pistol at the range while I was trying to field strip it. Then it would fail to return to battery after a shot. I'm not a very experienced gunner so I didn't realize that the barrel was getting peened after about 30 rounds. I ended the session at about 200 rounds and realized that I need to get this problem fixed.

I've finally done some searching and have realized that I'm not the only one with the same problem. A simple Google search "kahr pm9 peened barrel" yielded a number of valid forum posts addressing the same problem. Thankfully it sounds like Kahr is quick to fix the problems.

I love this gun and desperately want it back in the game. At least I'm not betting my life on it just yet.
at 3:45 AM No comments: